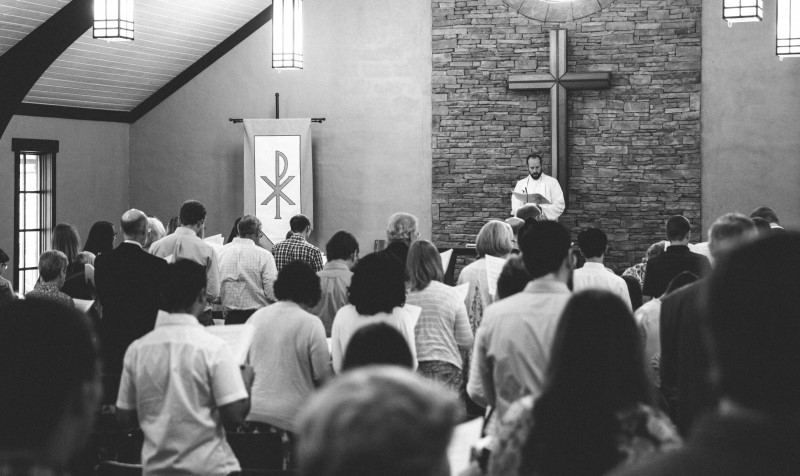 This post is based on the exhortation given before worship on August 16, 2020.

Our highest privilege is gathering for the divine service each Lord's day. What we do in the liturgy not only cleans up the messes we made in the previous week (as we confess our sins and hear absolution), it also lays the foundation for the week to come so we have strength to serve God in love and wisdom. This is the pattern of the Christian life. Grasping this pattern is important if we are to live faithfully in a culture that is falling apart.

We live in a culture that is committing suicide, a civilization that is crumbling from within. Now to be sure, I do not believe it is the job of the church to "save" the USA or to preserve Western civilization. Those things can die and the church can carry on, just as the church survived and even thrived after the fall of the Roman Empire. The church is not called to be a chaplain, propping up earthly regimes.

But -- and this is a pretty big "but" -- at the same time, our situation is not identical to those early Christians living in the Roman Empire. We have received a cultural and political inheritance that is largely, if imperfectly, the product of the gospel's influence on our country and civilization. Western civilization -- also known as Christendom -- was shaped by the leavening influence of God's kingdom. Future generations will not look upon us kindly if we do not defend that heritage.

Unfortunately, when you look at the state of the evangelical church today, you cannot help but see that many have either compromised or lost hope. Or perhaps they compromised because they lost hope. Many Christians are despairing over the culture rather than fighting to preserve and build upon its best features. But Christians should never be hopeless.

There is an old saying, "Hope is not a strategy." In one sense, this saying conveys wisdom. Unless we have a game plan in place, our hope is merely wishful thinking, and will not produce results. But for the church (as Andrew Sandlin has pointed out), hope is a strategy. Indeed, hope is not only a strategy, it is the ultimate strategy. This is because our hope is not a worldly hope, which is nothing more than wishful thinking. Our hope is solid, rooted in eternal and historical realities God has given us in his Word.

We gather here for worship to have our hope strengthened. Our hope is not in ourselves, our country, or a political candidate. Our hope is in God. And hope in God never disappoints. The hope God gives us is not only an eternal hope -- the resurrection of the body and life everlasting in glory -- but an historical hope for the growth and maturation of the kingdom between the first and final comings of Jesus.

So while we are disturbed by everything happening in the culture around us at the present moment, we know how to put in perspective. This is just a dark chapter in a happy story -- the story of the triumph of Christ and his kingdom over all. All of our cultural upheaval right now is just the writhing of a headless serpent. The serpent's head has been crushed, and while his flailing body can do some damage, his doom is certain. This is our hope -- a hope of certain victory in the future, based on an already accomplished fact. This hope makes us bold. Without this hope, our faith languishes and we become cowards. So we must continually have our hope in the gospel stoked.

And so in today's service, feed your hope. Feed your hope on the hymns and psalms, on the prayers and the preaching, on the Word and at the table. Let the liturgy do its work, nourishing your hope, and the courage that flows from it.