As if on Thrones: A Meal Fit for Kings 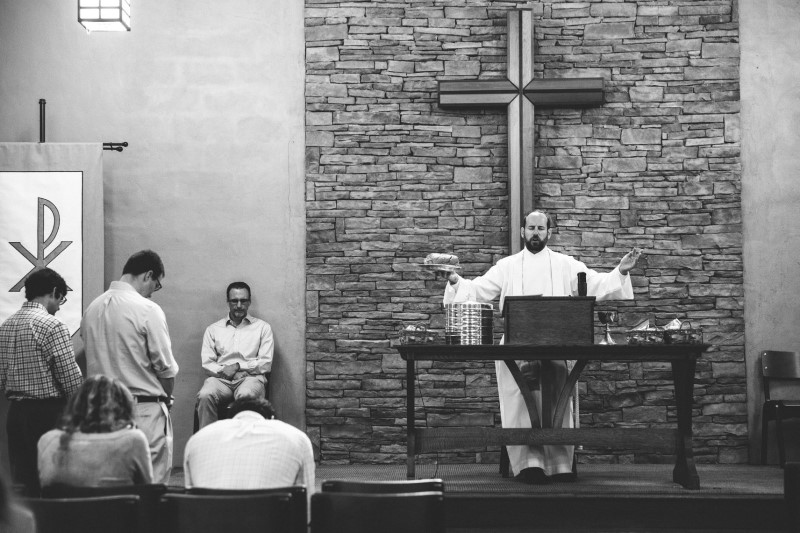 One question that comes up from time to time is “Why does TPC take communion seated?” This may not seem like a big deal, but the proper posture for the Lord’s Supper has caused serious debate in the history of the church, and continues to be an issue over which different Christian traditions are divided. There is actually quite a bit at stake in the details of our Eucharistic liturgy. While the validity of the Eucharist does not depend upon such details, they are still important not only as matters of obedience to God, but also in ensuring we experience everything God wants to give us in the Supper.

On the eve of the Reformation, the laity was largely excluded from the Lord’s Supper, but insofar as the people did partake, they did so kneeling. At least in some quarters this was connected to veneration of the elements themselves, a practice the Reformers rightly unmasked as idolatrous. The Reformation took great strides to restore the people to the table (though they made the mistake of not including baptized children). Soon after the Reformation began, the correct posture for eating and drinking became a matter of intense debate among Protestants.

The Anglican Reformation did not reform this particular practice of the Medieval church, and so communicants continued to receive the elements in a kneeling posture. As a result, in the Book of Common Prayer, the Supper tends to be penitential rather than celebratory – more tomb than table, as it is sometimes put. The fact that Thomas Cranmer kept a confession of sin right before the table further underscored the somber, introspective nature of the meal. Cranmer made it clear that kneeling was not an act of veneration towards the elements, but his reforms still fell short in this area.

Other Reformers insisted on a seated posture, sometimes even breaking out the tables so that the Eucharistic meal would really feel like a festive occasion. John Knox, at least for a while, opposed kneeling for communion, not only because it could lead back to idolatry, but because kneeling was a posture for beggars, not proper for Christians who come to the table as sons and daughters of the King, celebrating a royal feast.

What does the Bible have to say about our posture at the table? Scripture actually has quite a bit to say about the question. While some churches take standing, and others kneeling, Jesus and his disciples were seated/reclining (Mark 14:18; Luke 22:14; John 13:4). In the Scriptures, the seated position is a sign of both relaxation and royalty. Jesus' parables about the kingdom feast suggest those eating at his table will be seated (Matt. 8:10-12). Luke's account of the Supper connects being seated to our reign with Christ (22:29-30; cf. Eph. 2:6). This is a royal meal; hence, we partake in a royal posture, seated as if on thrones.

But we can add to the evidence. Every time Jesus performs a feeding miracle in the gospels, he explicitly commands the people to sit down before they eat (Matt. 14:19; Matt. 15:35; Mark 6:39, 8:6; Luke 9:15; John 6:10). While these meals were not Eucharistic, they were proto-Eucharistic, pointing ahead to the mystical and miraculous meal Jesus would give to his disciples.

Even old covenant sacrificial meals were eaten in a seated posture at least some of the time (1 Sam. 1:9). Why the repetition of this point throughout the Scriptures unless this was actually important to the theology and ethos of the Supper Jesus instituted? Again, this is a royal feast, so a royal posture is appropriate. Nothing should detract from the fact that the communion meal is a celebratory feast! In the liturgy, we have already knelt down in contrition to confess our sins; we have already stood at attention to hear the Word of our Commander and King; when we come to the table, it is time to sit and relax as we celebrate the victory Christ has already won on our behalf.

Moreover, it's evident from those miraculous feedings and from the Last Supper that Jesus did not personally feed each person present, but that the elements of the meal were passed from hand to hand among the disciples. In churches that kneel for communion, each communicant generally receives the elements directly from a pastor or other officer. But this practice obscures an important truth about church life, namely, the pastor is not only one who ministers Christ to us. Rather, as Luther said, we each give Christ to one another, as we love and serve each other. We want our way of doing the Supper to be shaped by Jesus' own way of feeding his people; thus we take seated, and pass the elements from person to person. We give Christ to one another in the meal, so we can give Christ to one another throughout our daily lives. The way we do the Supper at TPC keeps church life decentralized and reminds us that we are not just receiving gifts from a religious professional; we are each called to distribute and share the gifts we have been given with others in the body.

If ritual is important -- and it is -- isn't it vital to do what Jesus said to do, and to imitate his model, as much as we can? When Jesus instituted the Lord's Supper, he commanded his disciples to "do this" until his final coming (1 Cor. 11:24-26). To "do this" faithfully, we need to conform our practice of the Lord's Supper to the practice of Jesus as much as is logistically possible. Of course, some minor logistical changes to the shape of the ritual are inevitable. For example, a group larger than the twelve could not sit around a single table, eat from a single loaf, or drink from a common cup, as happened on the night Jesus was betrayed. There is no problem with multiplying loaves and cups, as needed. Further, while Jesus celebrated his final Supper before the cross with a group of men, we know that he intended for the meal to ultimately be celebrated among the whole church, including women and children. It is certainly possible the disciples had their families with them in the upper room; some scholars make a compelling case for that. But whether they did or not, we know that Jesus was instituting a covenant meal for the entire covenant community.

Every aspect of the Last Supper ritual that can be preserved should be church's practice since the ritual details are not arbitrary but carry rich and deep theological meanings.
As always, if you have any questions about this or anything else, feel free to approach me or any of the church officers.

I have preached on this topic before; click here for audio. I have also written at greater length on the reformation of worship in the 16th century Reformation and beyond; see the essay here.